The Art of Clean Water

If you were standing at the Eaton Centre in downtown Toronto and headed east on the Queen St. Streetcar, at the end of the line, about 8 or 9 km later, you would reach the RC Harris Water Treatment Plant.

You probably wouldn’t really notice it at first because it is hidden behind a large green fence, but behind that fence is a massive Art Deco complex built in the late 1930s and later designated as a heritage site.

While most buildings have their frontage facing the road, the RC Harris Water Treatment Plant changed the rules.  It faces Lake Ontario – and that face is pretty spectacular.

This past weekend was the 19th Annual Open Doors Toronto featuring over 100 of the “most architecturally, historically, culturally and socially significant buildings across the city”.*

This building has been on my radar for years.  I’ve done more than my fair share of travelling around the world and I no longer take it for granted how lucky we are to turn on a tap and have abundant, clean, drinkable water.

I finally got a chance to see the water treatment plant up close.

For a building with a utilitarian purpose, this one is an unusual work of art composed in marble and polished brass.

I wish I could say the same thing about its doors.  Sadly …. utilitarian. 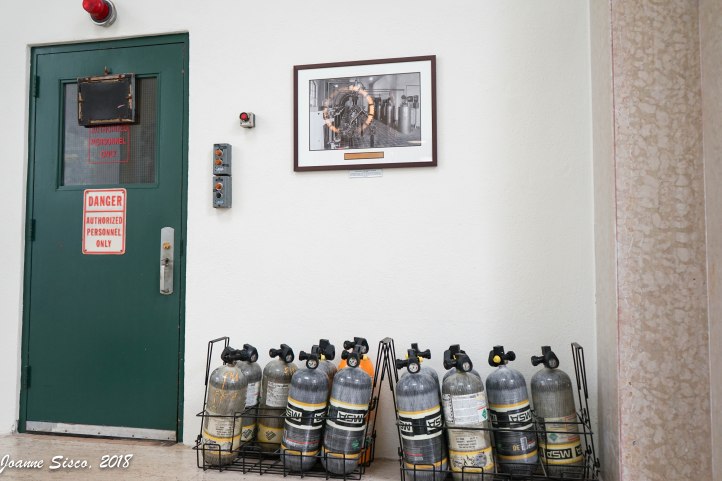 Just lots of plain green doors, although with a few interesting signs.

This is the largest of 4 water treatment plants servicing the city and RC Harris has a capacity of 950 million litres of clean water EVERY DAY.

A separate building containing the pumps that drive the whole system is located below the main building.

I almost didn’t bother to visit this building.  I mean, after all, it’s basically an engine room.  How interesting could it be?

Well, what can I say … I was even more impressed.  I’ve never seen an engine room that was so spotlessly immaculate.  At first I thought the floors were wet, until I realized they weren’t.  They just gleamed.

I questioned one of the workers if it was always this pristine and he said pretty well yes.

I guess when your business is purifying water, the facilities better reflect that philosophy of clean.